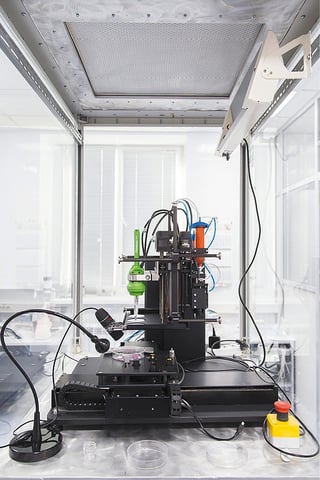 On average, 20 people die each day while waiting for an organ transplant, according to the United Network of Organ Sharing. However, scientists at the University of Minnesota envision a day when organ transplants from donors will no longer be necessary. Instead, failing organs will be replaced with ones created by specialized 3D printers. In a giant step toward that goal, researchers have manufactured lifelike artificial organ models using a custom-built 3D printer. These models mimic the exact anatomical structure, mechanical properties, as well as the look and feel of real organs. This research project is supported by two, five-year NIH grants that total over $2.6 million.

One of the immediate applications for this technology is improved models for pre-operative practice. In a study recently published in the journal Advanced Materials Technologies, researchers took MRI scans and tissue samples from three patients’ prostates. They tested the tissue and developed customized silicone-based inks that can be “tuned” to precisely match the mechanical properties of each patient’s prostate tissue. The inks were then used in a custom-built 3D printer. The researchers then attached soft, 3D printed sensors to the organ models and observed the reaction of the model prostates during compression tests and the application of various surgical tools.

“We think these organ models could be ‘game-changers’ for helping surgeons better plan and practice for surgery. We hope this will save lives by reducing medical errors during surgery,” the lead researcher Michael McAlpine Ph.D. stated in an article for University of Minnesota News.

Currently, most 3D printed organ models are made from hard plastics or rubbers. Therefore, they differ significantly in the way they look and feel when compared to the real thing. They are often too hard to cut or suture. This limits their application for predicating and replicating the organ’s physical behavior during surgery. Another issue with current 3D printed models in the lack of ability to give quantitative feedback.

The addition of the soft, 3D printed sensors to the organ models “…could give surgeons real-time feedback on how much force they can use during surgery without damaging the tissue,” said Kaiyan Qiu, lead author of the paper. “This could change how surgeons think about personalized medicine and pre-operative practice.”