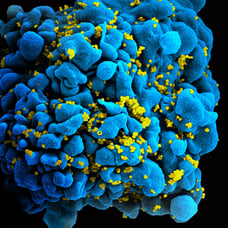 According to the World Health Organization, more than 36.7 million people around the world are infected with Human Immunodeficiency Virus (HIV). Although there is not yet a cure for HIV, some treatments are able to slow the spread of the virus. Researchers around the world study the virus with the hope of one day creating a cure to attack the virus. A team of researchers from the University of Southern California in Los Angeles are taking a different approach to fighting HIV – by creating a treatment that boosts the immune system instead of attacking the virus.

Led by Dr. I-Chueh Huang from the USC Keck School of Medicine, the Los Angeles-based research team will continue Dr. Huang’s work of stopping different viruses from reproducing by using a specific family of proteins. (Image courtesy of National Institutes of Health via Wikimedia Commons)

Dr. Huang explained that: “Most HIV drugs target the virus. But the virus is not stable; it always mutates – problematic because the virus can become resistant to effective drugs.”

The Huang lab has been studying an X4 strain of HIV, which emerges in the late stages of HIV when the infection has become more serious. Within this family of proteins, one – which has been named Delta 20 – has effectively been able to suppress X4. Using Delta 20 and the knowledge they have gained, the USC research team hopes to one day be able to develop new treatment methods for fighting the HIV virus.

“Our finding will not help develop a vaccine because the focus is on innate immunity rather than the virus. Perhaps one day scientists will create medicine that, like “HIV cocktails,” have to be taken indefinitely. But the new treatment may be more effective because it is harder for viruses to escape the body’s defenses,” explained Dr. Huang.