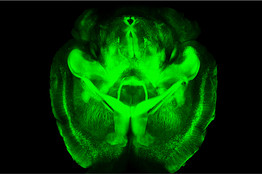 Earlier this year, researchers at Stanford University for the first time recorded 1,000 neurons working together in a living brain for a month. The brain cells blinked like Christmas tree lights as a test mouse moved freely around its cage.

They soon were able to pinpoint the mouse’s location just by watching its brain cells.

“We can reconstruct where the animal is in its space by looking at the brain recording,” said Stanford neuroscientist Mark Schnitzer, who led the research group that invented the wired monitoring device.

That experiment is part of a flurry of innovation happening this year in the study of the most mysterious human organ. Neuroscientists have invented a half dozen new bioengineering techniques to make useful wiring diagrams of brain circuits that can help draw the connections between brain cells, behavior and disease.

for more on this article…