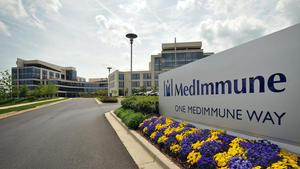 The story of MedImmune, the Maryland startup that British pharmaceutical giant AstraZeneca bought for $15.6 billion in 2007, is an example for entrepreneurs striving for their own blockbuster deals. But MedImmune leaders say they want to go beyond leading by example.

The company, now responsible for half of AstraZeneca’s pipeline of drug candidates, has signed a flurry of partnerships with federal and nonprofit labs in recent months, including deals to share resources and researchers with the National Cancer Institute, the National Institute of Standards and Technology and the Joslin Diabetes Center at Harvard University. Through the partnerships, the company can tap the labs’ brainpower and expensive equipment, and share its own resources.

The obvious goal of the collaborations is to discover AstraZeneca’s next marquee drug. The drugmaker has sold billions of dollars worth of drugs created in collaboration with the National Institutes of Health, including Synagis, a treatment for a respiratory virus in children, and FluMist, an intranasal flu vaccine MedImmune acquired in 2002.

Bahija Jallal, an AstraZeneca executive vice president who leads MedImmune, said the relationships are also part of a 10-year plan to elevate the region’s status as a biotechnology research and manufacturing hub. Sharing ideas and projects gives everyone the best chance of making valuable discoveries, she said.

“We believe we are part of one ecosystem here that we need to leverage even more,” Jallal said. “We don’t have this ‘invented here’ syndrome.”