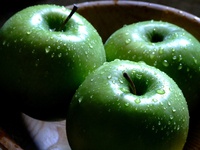 Organic fruits and vegetables are gaining ground in the food industry as a healthy alternative to produce that may have been grown with harmful pesticides and other chemicals. Unfortunately, however, this lack of chemical additives sometimes leaves organic produce susceptible to food-borne pathogens and microbes, which can cause illness in humans.

In an effort to increase the safety of distributing and eating organically grown produce, scientists at Washington State University are using ultraviolet C (UVC) light to destroy illness-causing bacteria on organic fruit.

The recent study, which was conducted by food safety specialist Shyam Sablani and his colleagues at WSU, found that UVC is effective against foodborne pathogens on the surface of certain fruits, and may offer a safe alternative to chemical sanitizers.

UVC light, which has a shorter wavelength than ultraviolet A or B light, works by destroying the nucleic acid and disrupting the DNA within the fruit-dwelling microorganisms, and can be effective in sanitizing surfaces as well as drinking water and contaminated air.

“UVC radiation is present in sunlight; however, it is completely absorbed by the ozone layer and Earth’s atmosphere” Sablani explained. “It has germicidal properties and can be effective against bacteria, mold and viruses.”

After conducting studies on a variety of organic fruits, the scientists found that UVC was most effective on apples and pears at destroying E. coli and listeria bacteria.

“If you have smoother skinned fruit, then this technology is really great,” Sablani said. “If the fruits are very rough and if the level of contamination is low, it also works quite well.” “Interest in this technology is high because it’s simple to implement and inexpensive,” he said.